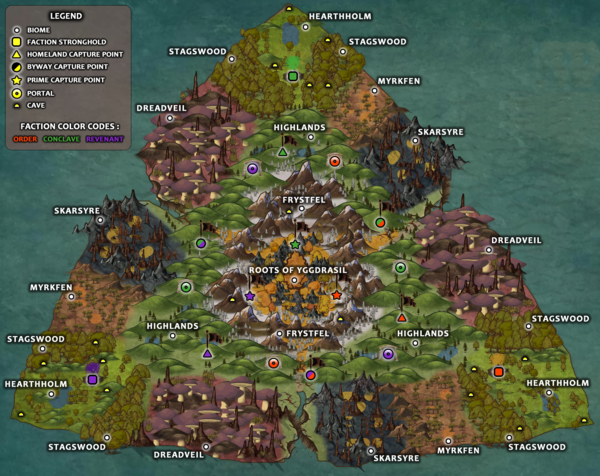 An unofficial rough map of the world of Rend

The Rend Map is a triangular layout consisting of roughly four major regions: one for each of the three Factions at each point in the triangle, plus a central area surrounding Yggdrasil. The three Faction areas are nearly identical in terms of resources and layout. The outer edges of the Map drop off into an abyss of empty space. Players who wander off the Map's outer edge will fall and die.

In the outer regions of the triangle, each Faction has similar access to their own respective versions of the Hearthholm, Stagswood, Myrkfen, Dreadveil, and Skarsyre Biomes. Moving inwards, the Highlands, Frystfel, and then the Roots of Yggdrasil Biomes comprise the central layers of the triangle.

The Biomes can be categorized into different tiers based on the materials their nodes and animals provide.

Each Faction's Stronghold resides in their respective Hearthholm biome.

A forested area on either side of Hearthholm, with relatively few dangers.

The Highlands contains Hardwood trees, all Homeland Capture Points and Byway Capture Points, and all Portals. It is cold enough in the upper parts to inflict cold status debuffs up to Hypothermia.

The Myrkfen is a hot and humid swamp found through the west Stagswood from the Faction Stronghold. You can pas through the Myrkfen to get to the Skarskye. Myrkfen's creatures and trees will commonly inflict diseases upon the player.

Skarsyre is an extremely hot area with acid pools and rock shelfs giving it two different layers. Touching an acid pool is normally instant death, although extremely rarely players may get out of the acid in time. It's hot temperature inflict the hot status effects all the way up to Inferno.

Dreadveil is a temperate mushroom forest without clear view of anything outside. Poison is prolific in this biome and caution should be exercised to ensure safety.

Frystfel consists of hazardous snow-capped mountains. Its cold temperatures inflict the cold status effects on players up to Flash Freeze, and it contains dangerous creatures. The mountain ranges of Frystfel contain a path into Roots of Yggdrasil.

The Roots of Yggdrasil is the most difficult biome. It is a magical-looking area that features glowing blue trees, crystalline outcroppings, and other whimsical features. Prime Capture Points are found here. It goes through 4 different seasons that each have their own unique challenges.