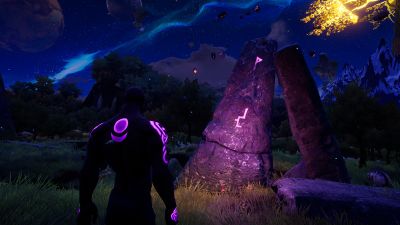 Runic Obelisks are a series of 10 stone pillars arranged in a wide circle and adorned with glowing glyphs. A series of Runic Obelisks resides near each Faction's Stronghold. Approaching a Runic Obelisk provides an opportunity to read its message (

). Each Obelisk in the series contains a different message explaining a basic component of Rend gameplay intended for beginners.

New players, and those that respawn after death, will appear initially near their Faction's Runic Obelisks.

Below is a transcription of all of the Obelisks' messages.

"This land is a harsh one, and you will have to survive on your own. Make sure to stay fed and hydrated, especially if you're doing a lot of activity like Sprinting. Temperature can have an effect on your Energy or Hydration as well."

"In order to win the game and ascend, you must collect Spirits and deposit them in your Faction's Divinity Stone. During the Reckoning, Lost and other Factions will try to take your stored Spirits. The Faction that ascends first will earn bonus Ascension Points."

"A Faction relies on its' [sic] members to use Sparks of Genius to discover powerful new technologies in the race for supremacy. These Sparks can be obtained through most activities, including gathering, combat, and crafting."

"A mirror of our world exists. You can cross over into the Spirit Realm for brief periods, but as you spend time there you will accumulate Spirit Sickness. You may be able to tame the spirits of creatures while in the Spirit Realm, but beware the dangeous Lost that haunt the other side."

"Harvesting resources requires the right tool. Right or left clicking on a resource with the correct tool can yield different resources. More advanced tools will allow you to harvest more powerful resources."

A Reckoning Is Coming[edit | edit source]

"When the barrier between this Realm and the Spirit Realm is thinnest, Lost will manifest in our world. They want nothing more than to consume the Spirits of your Faction's Divinity Stone. Work with your Faction to build a stronghold and defend your Divinity Stone. After the Lost are defeated, the defense shield around your Faction Stronghold will need time to recharge, during this time other players can raid your stronghold."

"With the Construction Hammer, you can switch to Build Mode by pressing "B". The structures you build in Build Mode will not be claimed until you place a Divinity Seed on them. You can also use these Divinity Seeds to transport your Spirit to another Divinity Seed, but you will leave behind your material possessions."

In This Together[edit | edit source]

"You are a member of a Faction, whether the militaristic Order, the secretive Revenant, or the exiled Conclave, your Faction brothers and sisters form the basis of your strength in this world. Do not be afraid to ask for assistance and be quick to lend a hand, as we all ascend or die together. You can even form a Clan with particularly helpful Faction members from the Social Pane."

"Your Faction takes care of their own, in return you shall aid your brothers and sisters in arms. Doing actions that benefit the Faction will earn you Faction reputation, while taking actions hostile to the faction will cause your reputation to drop. Certain permissions are only granted to those of good permissions, while others, like demolishing structures, are only granted to the highest ranking Faction Elders."